The SOFI 2021 report is out! Tracking hunger, skipping problem’s roots

The new State of the Right to Food and Nutrition Report 2021 is out! The report, published annually by the Global Network for the Right to Food and Nutrition, provides an overview of the impact COVID-19 and related government measures have had on the right to food and nutrition across different regions. It also illustrates the ways in which communities, small-scale producers, and civil society groups have organized to confront the crisis. The report complements the State of Food Security and Nutrition (SOFI) report published by various UN agencies from a human rights perspective that goes beyond numbers and shed light on the structural inequalities behind hunger and malnutrition (see also SOFI 2021 critique). 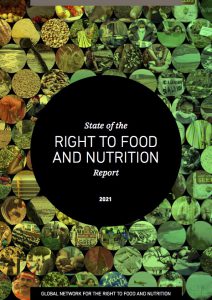 Can problems be solved without first knowing their roots?

Identifying hurdles, but remaining silent or hazy on where these stem from appears to be the constant predicament of the annual global assessment of food insecurity and malnutrition jointly produced by the Food and Agriculture Organization, International Fund for Agricultural Development, UN Children’s Fund, World Food Programme, and the World Health Organization.

In their fifth State of Food Security and Nutrition in the World (SOFI) report released last week, the said UN institutions again monitored how the world was progressing towards ending hunger and all forms of malnutrition, and drew an already anticipated conclusion: we are not on track to meeting the 2030 zero hunger target outlined in Goal 2 of the Sustainable Development Goals adopted by the UN General Assembly in 2015.

The report noted that last year, there were up to an additional 161 million people who experienced hunger amid the Covid-19 pandemic, pushing the total to 811 million, while nearly one in every three individuals   –   equivalent to 2.37 billion people worldwide   –   did not have access to adequate food.

The SOFI described the situation as “bleak” and “disturbing,” an indication that “we are moving in the wrong direction.” But what is more worrying is the report’s hasty generalization of conflict, climate variability and extremes, and economic slowdowns and downturns as the “major drivers” of hunger and malnutrition.

Laura Michéle, FIAN International program officer for nutrition and food systems, pointed out that while the current SOFI mentioned inequality as a compounding factor of hunger and malnutrition, the report failed to draw attention to the inequalities within the global industrialized food system.

This is despite the fact that the dominant food system triggers the rise of zoonotic diseases such as Covid-19 and makes people sick and vulnerable to illnesses through the promotion of ultra-processed and pesticide-laden food.

What made the SOFI sound “bizarre”, according to Michéle, was the report’s underpinning logic that the food system should be transformed to become more resilient to the mentioned major drivers of hunger and malnutrition – and not because it is in itself a central driver of  hunger and malnutrition, as well as  climate change, ecological destruction, biodiversity loss, and violations of peasants, indigenous peoples, and workers’ rights.

This failure to discuss the role of the industrial food system in causing hunger and malnutrition leads the report publishers to propose p highly problematic solutions for food systems transformation, centered around more technology and data, and the integration of small-scale producers into global value chains.

This will further entrench corporate dominance over food systems while undermining efforts towards real transformation based on diversified, local small-scale food production and agroecology.

While several of the case studies presented in the SOFI highlight the critical role of local food systems and small-scale producers, agroecology remains absent from the report’s recommendations for food systems transformation.

Furthermore, FIAN International criticized the SOFI’s focus on making healthy food more affordable, through ‘efficiency gains along the supply chain’ and techno-fixes such as bio-fortification.  Such view neglects the urgency to tackle the underlying inequalities and poverty that prevent people from accessing healthy foods. The report  moreover puts forward a corporate food systems lens in which food is seen as a mere commodity and consumers as “buyers”. The discussion thereby entirely leaves aside small-scale food producers and rural communities, despite them being among those most affected by hunger and malnutrition.

The GNRTFN report, published today, July 20, underscores how local peasant food systems based on agroecology have proved highly resilient amid the Covid-19 crisis and found innovative ways to confront it. This, despite the bias towards the corporate food system exhibited in many government responses to the pandemic.

“The pandemic laid bare the structural discrimination that underpins our societies and makes people vulnerable to hunger and malnutrition. It unveiled the multi-layered vulnerability caused by the global industrial food system, but it also showed that local food systems and small-scale food producers are resilient in times of crisis,” the report states.

It also urges people to “not forget that hunger and malnutrition have been here before and in fact on the rise for years.” And for us to address these, structural discrimination, inequalities, and exclusions should be tackled first.

The conclusions of the report are clear: “We will not go back to ‘normal’ – what we need is a radical change of direction.”

Source: Global Network for the Right to Food and Nutrition
Tags: SOFISOFI 2021The State of Food Security and Nutrition in the World
Previous Post

Qu, in his capacity of UN Designated Official for Italy