In July 2021, the Food and Agriculture Organisation (FAO) published its annual report titled “State of Food Security and Nutrition in the World 2021 Report: Transforming Food Systems for Food Security, Improved Nutrition, and Affordable Healthy Diets for All.” The present edition is a clear reflection of the fact that the world has recognised that agri-food systems – and their transformation – are central to building forward better after COVID-19, and to achieving the Sustainable Development Goals (SDGs).

The report was jointly produced by the UN Food and Agriculture Organisation (FAO), the International Fund for Agricultural Development (IFAD), the UN Children’s Fund (UNICEF), the World Food Programme (WFP) and the World Health Organisation (WHO).

The Report provides an eloquent indication of the impact of COVID-19 pandemic on food security – stated by the heads of the five UN agencies in the Foreword as well of  four major drivers: economic slowdowns and downturns; climate variability and extremes; conflict and cost; and affordability of healthy diets. In addition to the four drivers, the Report revealed that hunger has increased where there is a high inequality.

The Report also attested that: 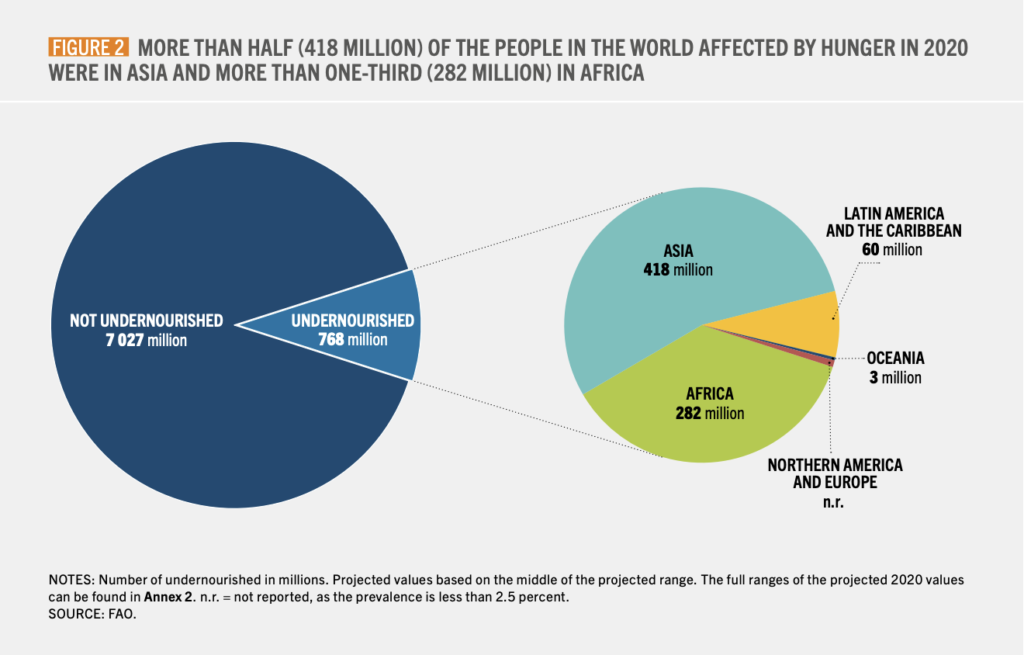 Image from the State of Food Security and Nutrition in the World 2021 Report.

The State of Food Security and Nutrition in the World estimates that SDG 2 (Zero Hunger by 2030) will be missed by a margin of nearly 660 million people.

The report identifies six “transformation pathways”, that, the authors say, rely on a “coherent set of policy and investment portfolios” to end hunger and malnutrition in all its forms:

In conclusion the Report encourages policymakers to consult, empower women and young people and to expanding the availability of data and new technologies, but above all, it urges the world to act now – or the drivers of hunger and malnutrition will persist in coming years.

The SOFI 2021 report is out! Tracking hunger, skipping problem’s roots