No Result
View All Result
Home _ 4 Sharing is caring!

The dining experience in South Korea is unique because of the wide selection of banchan (side dishes) that are served with almost any meal. An array of kimchis, fresh vegetables, fruit, fish, seafood, meat, pickles, pancakes, and more are provided free of charge. It is one of the pleasures of Korean culinary culture. However, the meal in itself is usually a challenge to finish and so rarely do all the banchan get eaten.

Normally people take a bite of them here and there and that’s it. With so much food going unconsumed, the country began to have a lot of problems due to that excessive amount of food waste going to landfills.

Changes had to be made.

From this dilemma arose a great solution by the country’s government and new sustainable habits amongst its citizens. South Korea’s capital city Seoul now operates one of the most rigorous food waste recycling programs in the world with impressive results. Today, 95% of food waste is recycled – into compost, animal feed, methane gas (through anaerobic digestion) or solid fuel – which is a remarkable leap from less than 2% in 1995.

It all began in 2005 when the South Korean government banned sending food to landfills. Then in 2013 they also prohibited the dumping of garbage juice (leftover water squeezed from food waste) into the sea. From these new regulations, Seoul has managed to cut the amount of food waste produced by 400 metric tons per day. The best part is the system that arose to deal with what would be done with the food waste and its leftover liquids. 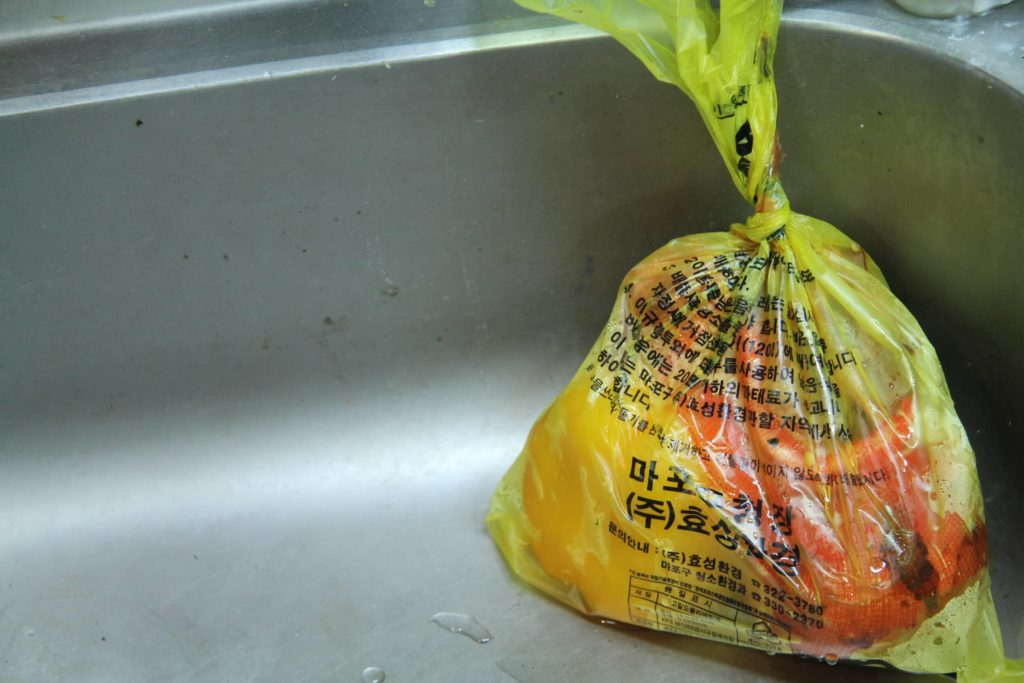 Since 2013 all residents have been required by law to discard food waste in special biodegradable bags, into designated waste collection buckets. Each bag discarded is charged a fee, priced according to volume. The bags themselves are purchased from the local convenience store or supermarket. In all, the bags and their disposal average a cost of about $6 a month for a four-person family.

This expense is essentially a fee on food waste paid up front and in accordance to how much is wasted. According to government data, this tax pays for roughly 60% of the cost of collecting and processing the city’s food waste. This pay-as-you-waste scheme was born out of necessity but it’s a very good example for other nations to take on too.

Kim Mi-hwa, chair of the Korea Zero Waste Movement Network and one of the earliest advocates of the pay-as-you-waste scheme, said:

“Unlike countries where meals are one-plate dishes, South Korean food culture is centered around banchan [a variety of side dishes that accompany meals], which creates a lot of leftover food. The waste just wasn’t decreasing, so we campaigned the government by telling them that we’d need a radical solution. Not only does South Korea have small land mass, but growing public awareness about the environment made it impossible to just add more landfills or processing plants.”

Not only does this brilliant and simple scheme offer incentives for the people to reduce waste, but it also makes them confront it. “It made me cut down on the food I threw away a lot,” Chung said. “Not only for economic reasons but visually it makes you aware of how much waste you’re producing.” 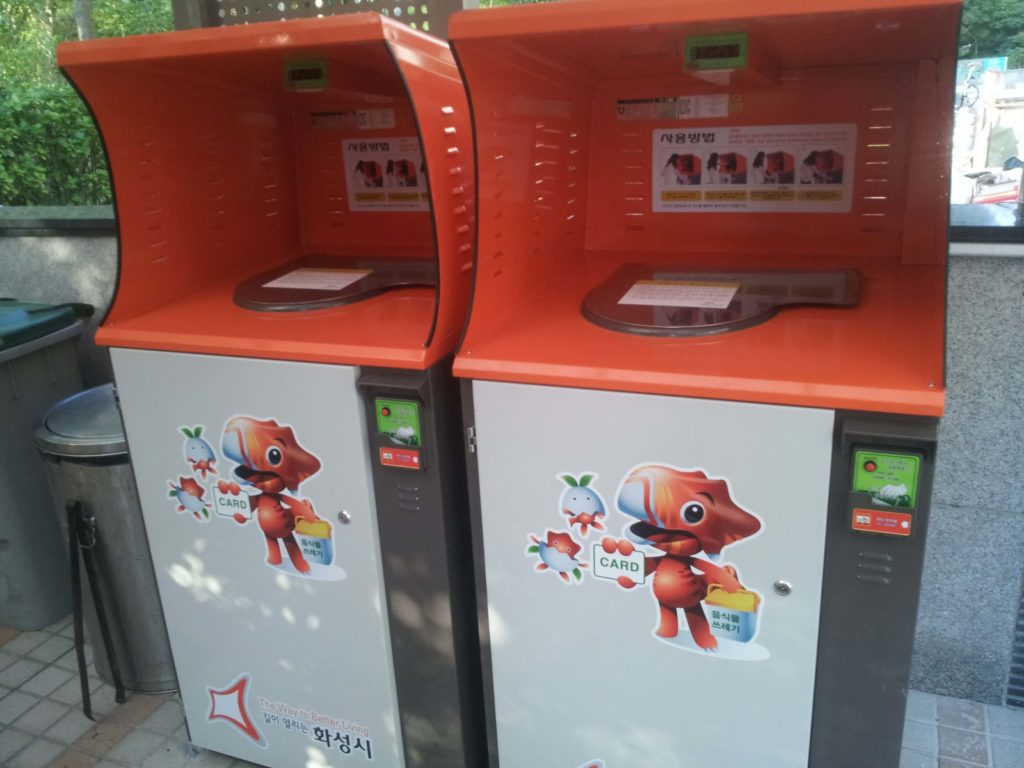 There are also specially made buckets or even at computerized collection points. At a district in southern Seoul (Songpa) they have been installing (since 2013) a radio-frequency identification (RFID)-based centralized system of food waste collection at multiple apartment complexes across the city. Unique electronic ID tags were issued to each resident which they were to use when depositing food waste at one of several hundred collection points. Machines weigh each deposit and charge each user accordingly.

“Over the last six years, we reduced a total of about 47,000 tons of food waste [with the RFID machines]. We assume it’s because people want to pay less money, since the cost increases with the weight.”

Another chief benefit of the RFID machine is that it encourages residents to remove any moisture ― which accounts for about 80% of food waste ― before tossing it in the machine to save money. That also saves on collection costs. In Songpa District alone, according to Lee, the machines have saved 9.6 billion won (about $8.4 million) in logistical expenses.

Korea Expose explains the procedure of what happens to the waste that is collected using Naen, a waste treatment plant, for example:

“On the edge of a building site in Seoul’s eastern Gangdong District is a complex of green buildings. Hang around there for a while and you’ll see food waste trucks turning up from all over southern and eastern Seoul. The complex is operated Naen, a private contractor that recycles some three to four hundred tonnes of food waste every day into animal feed. 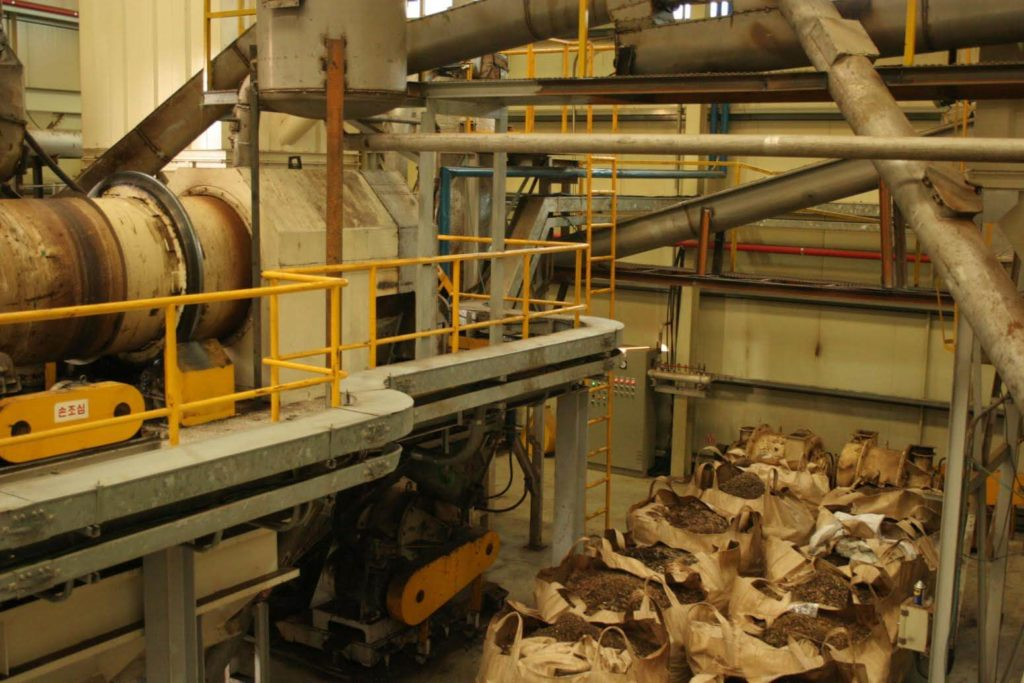 Upon arrival at Naen, the waste is dropped into underground tanks, then carried by screw conveyors to a separator, where non-food content — mostly plastic bags — is removed. The waste is then squeezed in a conical screw press to get rid of as much moisture content as possible. Typically, food waste consists of 80 to 85% moisture.

The orange “juice” squeezed out at this point is collected in another underground tank, then sent off to a wastewater treatment plant where it is fermented to produce methane. The methane is then used as fuel.

The squeezed waste is then carried to steam dryers, where it is dried for three to four hours at 120˚C. Next, any remaining impurities are removed and the dried waste is powdered. The animal feed is ready.”

Still Too Much Waste

Even though the program has been extremely successful, people are still wasting too much food. Seoul’s food waste processing centers reported large amounts of dry fertilizer stacking up unused. “There’s a limit to how much food waste fertilizer can actually be used,” Kim said. “This means there has to be a change in our dining habits, such as shifting to a one-plate culinary culture like other countries or at least reducing the amount of banchan that we lay out.”