From our humble beginning in October 1921 until today, Soroptimist International (SI) was founded on the principles of human rights, social & economic justice, equality, peace, and international goodwill and to transform the lives of girls and women of all ages through our international partnerships and our global network of members. SI is a worldwide volunteer organization for women, in 3000 communities in 121 countries.

We started 2020 filled with excitement and hope, this year we would celebrate the 75th anniversary of the UN, the 25th anniversary of both the Copenhagen declaration and the Beijing Platform for Action, and the 5th anniversary of the 2030 Agenda (SDGs) but in a flash our world changed and for the last few months, all of us have been focused on our own health and safety as the world is being ravished by COVID-19, the worst pandemic in 100 years which has changed our life as we knew it forever. Global deaths continue to rise and unfortunately, the black, brown and indigenous communities have been the hardest hit.

Observing senseless acts of racism as well as blatant violence against peaceful demonstrators and attacks against the Press, we are saddened and disheartened. As an organization we strongly believe in Freedom of Speech and Peaceful Assembly that are fundamental rights in the UN Declaration of Human Rights.

In January 1941, during his State of the Union address President Franklin Roosevelt gave his “Four Freedoms speech” (Freedom of Speech; Freedom of Worship; Freedom from Want; and Freedom from Fear) the world at the time faced unprecedented danger, instability, and uncertainty. Sadly, not too dissimilar today. The push back against multilateralism leaves us in a place less safe and secure. FDR made the case for universal freedoms for all people and they are needed now more than ever as the inequalities within and among nations grows.

We stand in solidarity with people of color and all who are equally outraged by these longstanding injustices. We are determined that there needs to be anti-racist action now and that we can no longer remain silent or try to invalidate or dismiss racism in any form. We must all take responsibility for our own actions. We must speak out and be proactive to end racism, indifference, and hatred and to ensure “we leave no one behind”.

SI is committed to being the Global Voice for Women by creating a world that is inclusive, that celebrates diversity; a world that supports women’s leadership and raises up the historically marginalized voices, and a world where everyone is valued, safe and secure. Without racial justice it will be impossible to achieve Gender Equality.

We need to invest more in creating opportunities for our children and to invest in restorative justice and social services for all marginalized people. We must be bold and reimagine how to invest in our communities. Both COVID-19; and police brutality have further exposed the need to overcome the structural racism and inequality.

We pledge to actively work within our communities and networks to uphold the human rights of all. 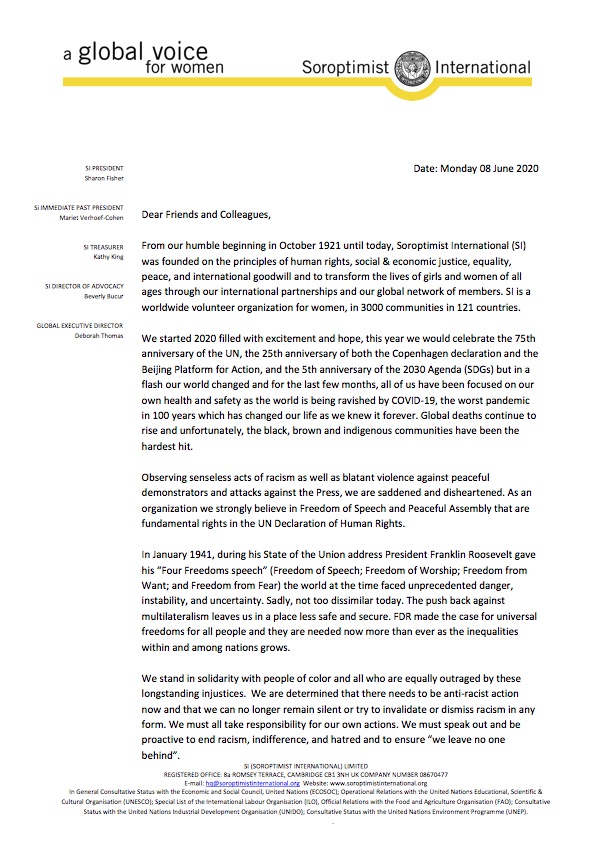 Correspondence between FAO and AHG of INGOs