Making food an instrument of peace: the 2021 objectives of the Nobel Prize Wfp-Pam

14 0
0
27
SHARES
204
VIEWS
Share on FacebookShare on TwitterShare on Whatsapp
On World Day of Peace, the testimony of the Deputy Director of the United Nations World Food Program, the Indian Manoj Juneja. “The Nobel Peace Prize is a call to action – he tells us – funding is needed immediately to prevent the health pandemic from being followed by a hunger pandemic in 2021”. With the Pope to use gun money to feed “the most vulnerable”

“Food is an instrument of peace: as the World Food Program we feed 17 million children in school, we employ farmers so that they build canals to irrigate their fields and roads to reach the market and sell their products. All this creates paths of peace ”. Thus the executive director of Wfp-Pam (World Food Program) Manoj Juneja , recalls why the Nobel Prize 2020 went to the United Nations agency, which is “the largest humanitarian organization in the world”, and feeds more than 100 million people every year.

Building paths of peace for those who come out of conflicts

On World Peace Day we relive with Juneja, 60, of Indian origins and studies in London, Deputy Director and Chief Financial Officer of the WFP since 2013, the moment of the Nobel Prize, on 10 December in Rome, and not in Oslo, as per tradition, due to the pandemic. Welcoming the coveted recognition, the UN agency wrote that its goal is “to build a path of peace, stability and prosperity for those recovering from conflicts” and to alleviate tensions, including internal ones, which could turn into wars.

Because the vicious circle to be broken, recalled by the Nobel Committee in the motivations for the Wfp-Pam Prize, is that wars can cause hunger, but also “food insecurity can ignite latent conflicts”. For this reason, Juneja tells us, the first thing to do “is to stop the wars”, so that those who live in the fields can grow food to feed themselves and the economy does not stop. This is why 60 percent of the 690 million people suffering from hunger today live in conflict zones.

And then we must continue to finance humanitarian and assistance programs, which foster stability and peace. The WFP is asking for 3.7 billion euros for the emergency by 2021, to avoid the worst for millions of people, and in total 12 billion, to carry out aid programs in 80 countries. “The Nobel Prize is a call to action – he tells us – if we do not act, the pandemic of hunger will follow the health pandemic”. Acute hunger affects 270 million people today, doubled by the consequences of Covid-19, and countries such as Yemen, South Sudan, Nigeria, Burkina Faso, Syria and the Democratic Republic of the Congo do not have the fiscal stimuli and aid of the Western ones.

With the Pope to use arms money against hunger

This is why the WFP-WFP is with Pope Francis when he says that “no one must be left behind” and asks to fight spechi and inequalities, creating a global fund to eliminate hunger with the money used for weapons. “A small percentage of expenses” such as military ones, used “to reduce the suffering of the most vulnerable” agrees Deputy Director Juneja “could lead us to the ‘Zero Hunger’ goal” (set by the UN for 2030, ed.).

Juneja: We help over 100 million people every year

This is how the executive director and financial director of the World Food Program – World Food Program, Manoj Juneja , talks to Vatican News about the Nobel Peace Prize and the humanitarian emergencies of this 2021 which is still opening in full pandemic.

R. – The World Food Program is the largest humanitarian organization in the world. We provide food assistance to over 100 million people every year and also promote a sustainable future for countries. Where there are conflicts there is hunger: war can eliminate the means of agricultural production or the economic means of buying food. Conflicts force people to leave their jobs, their land and their livelihoods. Migration can also create tensions in communities, for example in the competition for water between farmers and shepherds, and desperation can be exploited by armed groups. Furthermore, food is an instrument of peace: the WFP, for example, provides school meals to 17 million children, employs farmers to build irrigation canals,which then also improve their agricultural production. or to build roads that help small farmers to reach markets. All these activities create a path of peace.

The director Beasley, in receiving the award on December 10, stressed the absurdity of certain figures: in the world there are 400 trillion dollars of wealth, and 5 would be enough to save 30 million lives from hunger. Do you agree with the proposal made by Pope Francis on the last World Food Day: “To establish a ‘World Fund’ with the money used in arms to be able to definitively eliminate hunger and contribute to the development of the poorest countries”?

A. – We agree with Pope Francis that eliminating hunger and helping the poorest countries to develop are fundamental objectives to which all humanity must contribute. Just like the Holy Father, WFP also cares about others, the most vulnerable, because we believe that no one should be left behind. In fact, on the Nobel medal there is “peace and brotherhood” engraved, and this is what inspires us and guides us in our work. Both the Pope and we in the WFP often talk about waste and inequalities, and we compare the investments needed to eliminate hunger and poverty with other expenses. These comparisons remind us that reducing the suffering of the most vulnerable is feasible: a small percentage of these expenses could lead us to the “Zero Hunger” goal.Let’s take for example the concentration of wealth: we have around 2200 billionaires in the world, who have assets of over 8 trillion euros. And 5 billion would be enough to save 30 million lives from hunger.

The Nobel Prize was awarded to you in a moment, you write in your communiqués, when famine threatens millions of people again, especially in four conflict-affected countries – Yemen, South Sudan, northeast Nigeria and Burkina Faso – in a alarming convergence of conflict, hunger and the Covid-19 pandemic. Are these the emergencies that await you also in 2021 or could others arrive?

R, – 2021 will be a decisive year, and the Nobel Prize is a call to action: if we do not act, a hunger pandemic will follow the health pandemic. We have seen the impact of the pandemic in Western countries, and all this despite fiscal stimuli of over 15 trillion euros. But let us think of the countries that do not have these financial means, which do not have social safety nets, and which, in addition to Covid-19, are affected by conflicts or climate change. In 2021 we must avoid famine in the four countries you mentioned, but 270 million people suffer from acute hunger – a number that doubled during the pandemic. The list of our emergencies is therefore much longer. WFP has programs in over 80 countries and all are in need of food assistance. For example, the Democratic Republic of the Congo,which has 22 million acutely malnourished, or Syria, which is in its tenth year of crisis and where a third of the population is displaced. 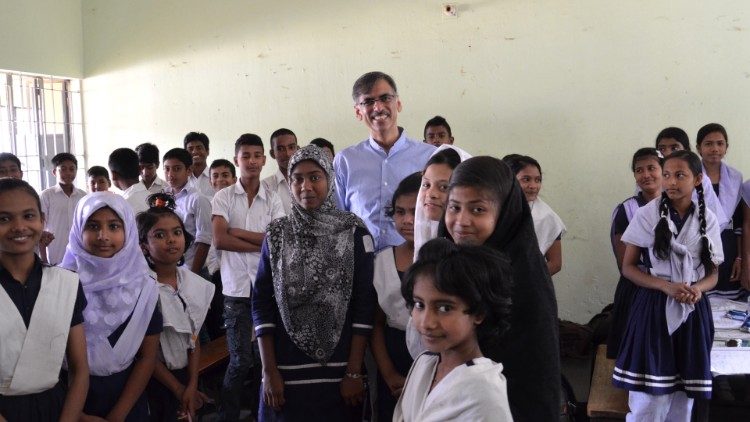 How to break the vicious circle described in the reasons for the award by the Nobel Committee, for which “wars and conflicts can cause food insecurity and hunger, just as hunger and food insecurity can ignite latent conflicts and trigger violence?”

R. – The first thing is to stop the wars. Indeed, 60 percent of the 690 million hungry people live in the midst of conflict: we must stop the fighting so that people can grow food, support each other, build lives and livelihoods. All of this requires a lot of political will on the part of those involved in the conflict. The second thing is to finance humanitarian and assistance programs that can become a stepping stone towards food security, stability and lasting peace. The World Food Program needs urgent funding and all of our contributions are voluntary contributions from governments and individuals. 2021 will tell us whether our appeal for a total of around 12 billion euros will have been heard.Food is peace and we cannot abandon the most vulnerable now.

FAO Director-General, thanks Members & partners for their support

A collection of statements, tools and initiatives from the Holy See and the Catholic Church related to Aqua fons vitae

A collection of statements, tools and initiatives from the Holy See and the Catholic Church related to Aqua fons vitae