FAO releases new data and analysis on the region’s hunger and malnutrition situation in a shorter, more compact format.

Budapest, Hungary – Undernourishment and severe and moderate food insecurity rates in Europe and Central Asia are, on average, much lower than in the rest of the world.

However, more than 14 million people became moderately or severely food insecure from 2019 to 2020, during the COVID-19 pandemic.

Furthermore, with overweight and obesity well above the global prevalence – and on the rise – the region’s 50-plus countries must renew their commitments to ending hunger and malnutrition by 2030, as envisaged by the Sustainable Development Goals (SDGs). 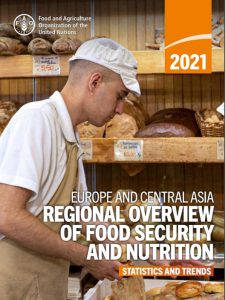 The latest data and trends are now accessible in the Regional Overview of Food Security and Nutrition in Europe and Central Asia, produced by the Food and Agriculture Organization of the United Nations (FAO).

In the past two decades, countries in the Europe and Central Asia region have made significant progress in combating undernourishment. Worldwide, the number of people with insufficient food consumption increased from 8.4 percent in 2019 to 9.9 percent in 2020, while in Europe and Central Asia, the regional average remained below 2.5 percent – where it has been for nearly two decades.

However, this figure hides subregional differences: while the number is low in the European Union, the European Free Trade Association and among European countries of the Commonwealth of Independent States, small increases have been detected in the Caucasus, Central Asia and the Western Balkans in the past couple of years.

“The pandemic has had a negative effect on food security in the Europe and Central Asia region,” stated FAO Assistant Director-General and Regional Representative Vladimir Rakhmanin in the publication’s foreword. “It is in this light that the report seeks to assess how food security and nutrition indicators in the region, subregion, and countries have changed under the shadow of the pandemic and to monitor the region’s progress towards achieving the SDGs.”

Globally, 2020 was marked by the outbreak of the COVID-19 pandemic and the resulting disruptions to markets, trade and food supply chains. In Europe and Central Asia, the number of severely food insecure people grew by 7 million in 2020 to 22 million (or about 2.4 percent of the population), while those experiencing moderate or severe food insecurity (lacking access to safe, nutritious and adequate food) grew by 14 million to 111 million (11.9 percent of the total population). While this is a regional average, the proportions in the Western Balkans, Central Asia and the Caucasus are higher.

“With pandemic policy responses varying greatly according to each country’s level of wealth and political will, national and subregional inequalities in access to food and nutrition are certain to grow,” Rakhmanin said. “This must be dealt with to ensure that the Europe and Central Asia region moves forward in attaining sufficient food and nutrition for all, with a pledge to leave no one behind.”

A closer look at the nutrition indicators

Progress has been made in reducing various forms of malnutrition, including (in most countries of the region) child stunting, child wasting, and low birthweight. However, Europe and Central Asia is in a worse position in terms of exclusive breastfeeding, childhood overweight, and adult obesity. The data and trends are especially alarming for adult obesity in all subregions, and the pandemic might further exacerbate the problem. Despite recent improvements in reducing overweight among children, the region, at 7.1 percent, remains above the world average.

“Even before the pandemic, the situation in the Caucasus and Central Asia was already vulnerable and became even more so in 2020,” said Cheng Fang, an FAO economist and the main author of the report. “The resilience of the whole region depends on the provision of solid effort in these vulnerable subregions. The growing rate of adult obesity, for example, is posing a problem not only in high-income countries, but also in low- and middle-income countries of the region.”

The prevalence of anaemia among women of reproductive age in recent years remained at 17.4 percent, as in 2000, with higher rates in some Caucasus and Central Asian countries at close to or even above the world average of 29.9 percent.
In terms of exclusive breastfeeding, the region – especially the Caucasus subregion and Central Asia – has made significant progress (from 31.1 percent to 41.7 percent from 2012 to 2019), even though the prevalence remains below the global average.

More details are available in the 2021 regional edition of the FAO flagship report, which, using the latest hunger and malnutrition data, tracks the progress of Europe and Central Asia towards meeting global sustainability targets, with special regard to the Zero Hunger targets of SDG 2.

OUR ACTIONS ARE OUR FUTURE

Let’s give the gift of a sustainable city!

Let’s give the gift of a sustainable city!