2021 report of the Intergovernmental Panel on Climate Change (IPCC)

2021 report  of the Intergovernmental Panel on Climate Change (IPCC) 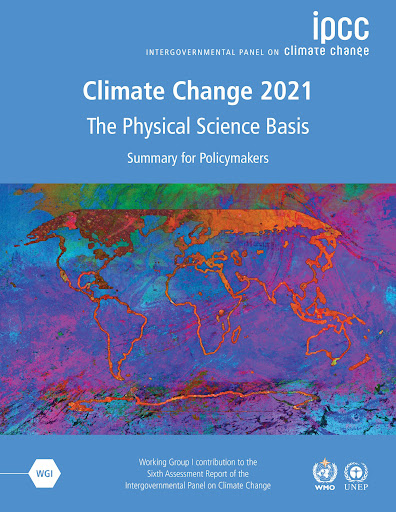 The Intergovernmental Panel on Climate Change 2021 report has been released. “Earth has warmed 1.09 degrees C since pre-industrial industrial times and many changes such as sea-level rise and glacier melt are now virtually irreversible, according to the most sobering report yet by the Intergovernmental Panel on Climate Change (IPCC).”
“The Report also found escape from human-caused climate change is no longer possible. Climate change is now affecting every continent, region, and ocean on Earth, and every facet of weather.”(ref. P.Canadell et al “This is the most sobering report card yet on climate change and Earth’s Future. August, 2021”)
“The IPCC is the global authority on the state of the Earth’s climate and how human activities affect it.”
“Global surface temperature has warmed faster since 1970 than any other 50-year period over at least the last 2,000 years, with warming also reaching ocean depths below 2,000 metres.”
“The speed at which atmospheric CO2 has increased since the industrial revolution (1750) is at least ten times faster than at any other time during the last 800,000 years.”
“About 85% of CO2 emissions are from burning fossil fuels” which is coal, oil and gas. 15% is from deforestation and degradation. The other greenhouse gases are methane, from livestock and gas industries, and nitrous oxide from nitrogen fetilisers on crops. (Ref W. Rainbird Report to ICW Other Greenhouse Gases, May 2021.)

Across the World we have experienced the terrible destruction from the effects of extreme weather events; the destructive floods in Europe and China; the heatwaves and droughts leading to destructive wildfires in western North America, in Greece and Turkey, in eastern Siberia, and as experienced in Australia in 2019 to 2020.
Drought in eastern Africa has worsened, causing lack of water and people to migrate.
Ocean temperatures are rising and causing coral reefs to bleach, kelp forests to die off, and causing algal blooms that are toxic, as well as marine species to shift their locations. Sea levels are already rising.
The Greenland ice sheet has large areas that are in danger of melting and adding to sea-level rise.
As glaciers melt we will see more dislocation as the usual glacial melt-water supplies change for alpine communities. This is already happening, for example in Nepal.

Women of the ICW need to urge any level of government to take action urgently and deeply. SDG 13. We need to urge reductions of fossil fuels.

“The IPCC findings say 1.5 degrees warming will be reached or exceeded in the early 2030s in all emission scenarios considered_ except for the higher emissions scenario, for which the crossing would occur even earlier” ( Ref. M.Grose et al “IPCC says Earth will reach temperature rise of about 1.5 degrees C in around a decade. August,2021“)
We do not have time to waste, as temperatures rise, the effects will worsen.
Humans have caused this serious state, so humans make the deep changes needed.
We know what we should and can do.
We can transition from burning fossil fuels of coal, oil and gas. We just need to do this faster.

SAVE THE DATE - CFS Press Conference